Last night and today I have been replacing the lines in our 4 tap Andale font. What I have done here has worked for MY font, your Andale flooded font is probably different, so this guide may not work for you!

Thankfully it turned out to be quite easy! Just needed a little patience and elbow grease. In hindsight I should have lubed up the lines a bit when putting them into the font, because I damaged them slightly on a sharp edge inside the font, but I got there in the end! The lines connect to the tap mounts with compression fittings, they are very very tight, so the lines shouldn’t be an issue.

I had to use two different brands of line; Valpar/Andale line, which was exactly 5mm ID and 8mm OD (well, printed as such), plus some John Guest line which is close to 5mm ID and 8mm OD (it’s actually an imperial size: 5/16″ OD and 0.187″ ID). I was able to use the John Guest line for 3 of the taps, but then it had run out, so I had to finish the last one with the spare Andale line supplied with the font.

The basic steps I did are as follows: 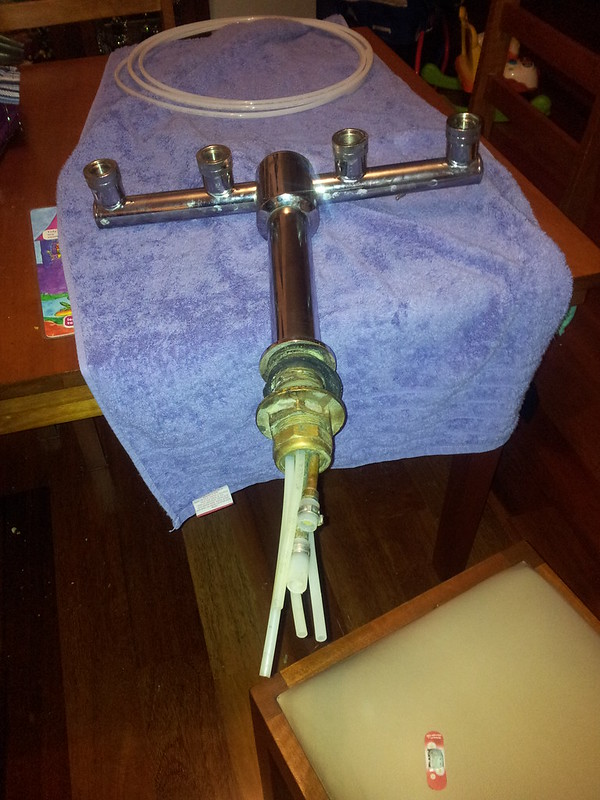 Unscrew these collars from the mounts: 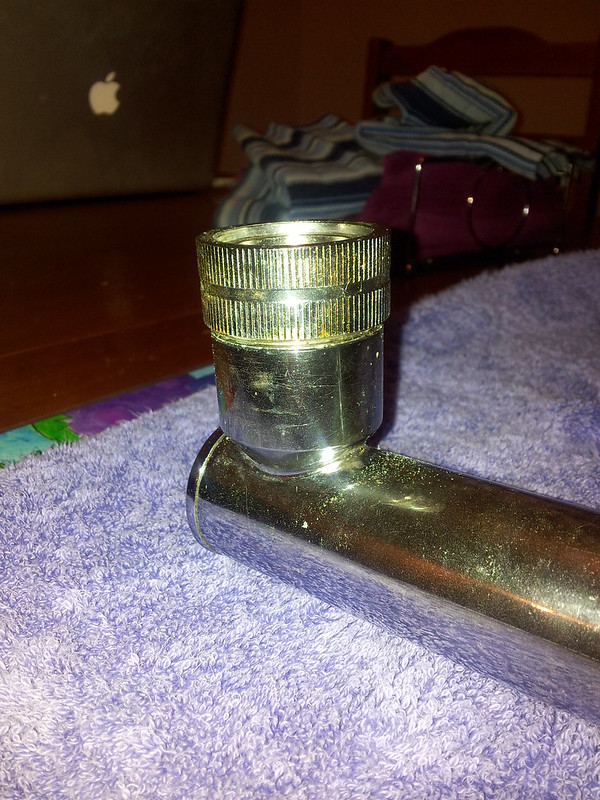 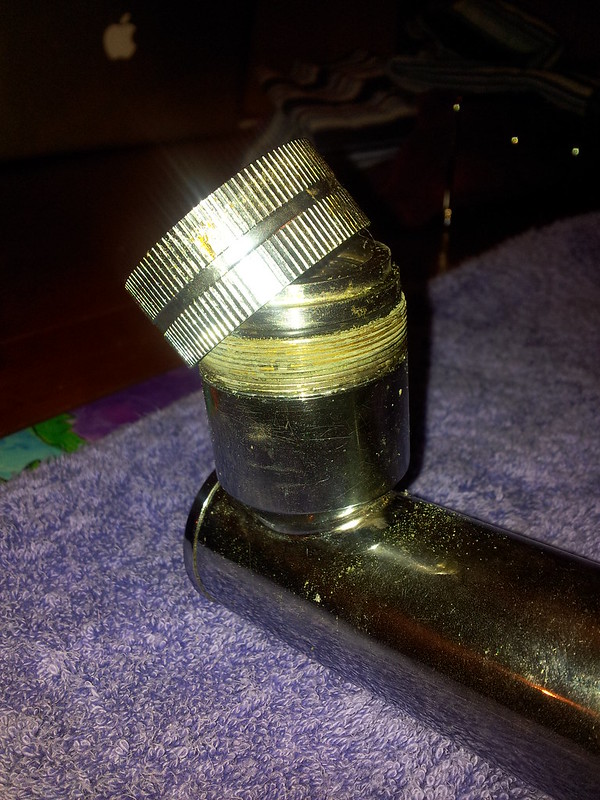 Remove the base seal and glycol manifold: 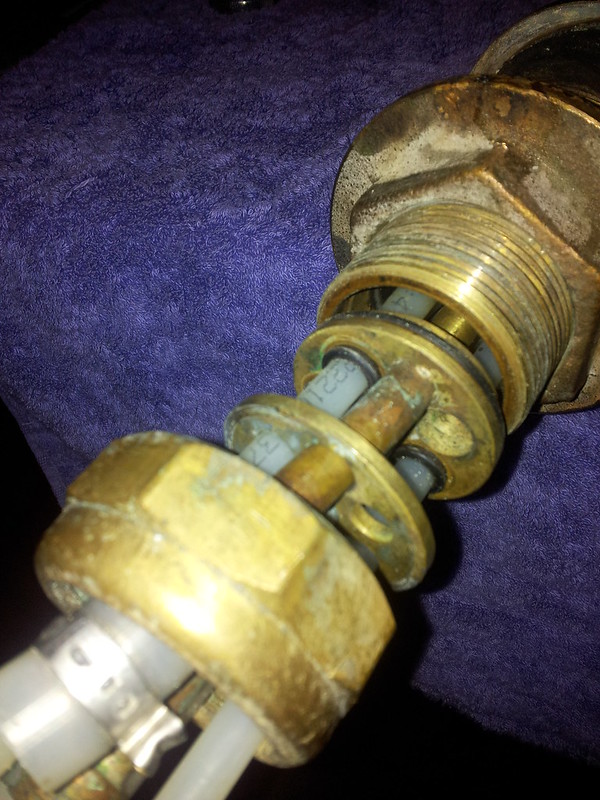 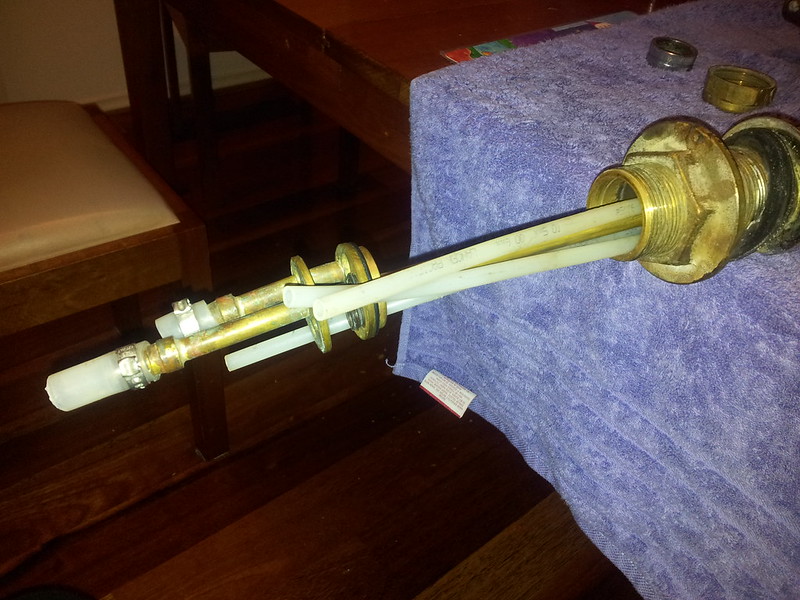 Don’t loose these 4 seals, or if you flood the font it will leak! 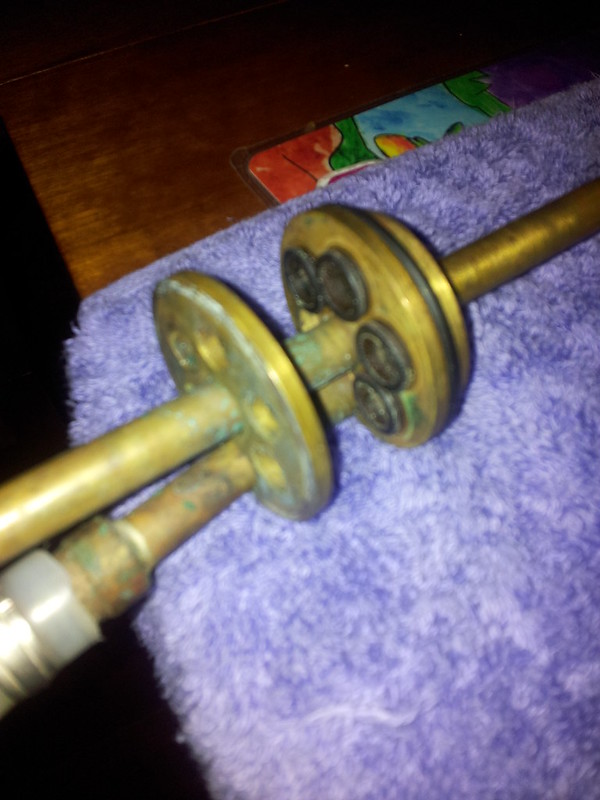 Gently remove the rubber seal with a small screwdriver, then use a large screwdriver to lift the mount up. It has a secondary rubber seal around it, the mount itself isn’t too tight it’s just the rubber seal and the resistance of the beer line catching on the edge inside the font which make it tricky to get out. You may need a friend to push the lines from below while you pull on the mount: 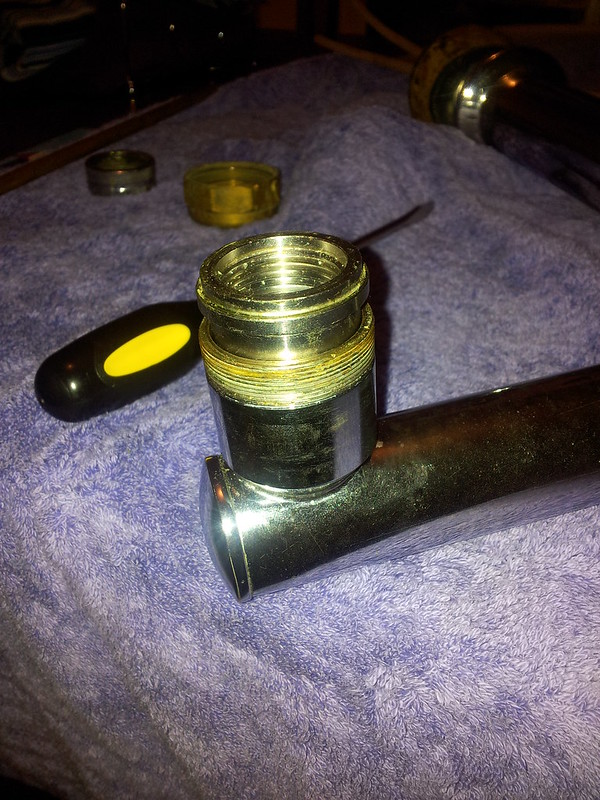 Don’t go nuts yet! At this point you just need to work out which line you’re pulling through, because you need to join your new line to the old one, to pull it through. If you don’t, it will be nearly impossible to get the new line in, without removing endcaps from the font. To join the lines I was lucky to have some barbed joiners on hand – supplied by the seller of the font! He also included some fresh beer line – it has had some use, but it’s really close to new, with no beer residue in it.
Join the new line to the old: 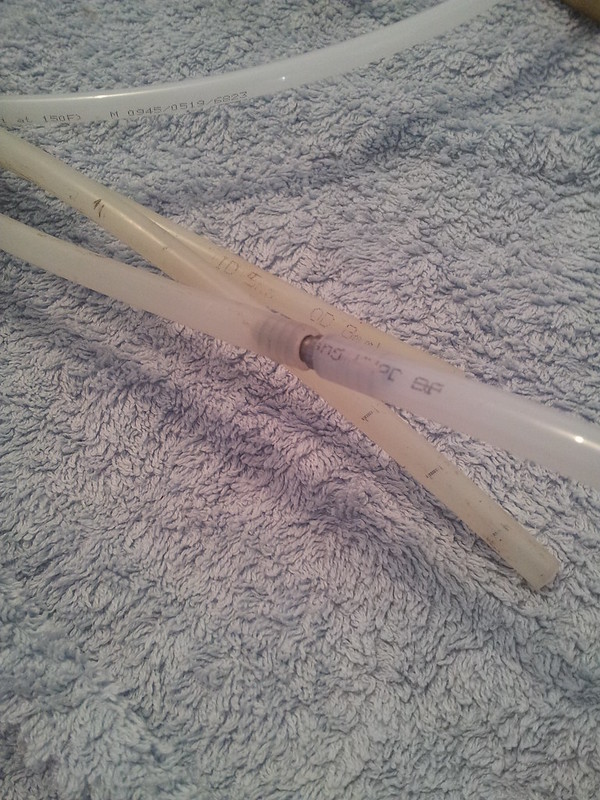 Pull it through, you’ll need elbow grease (or real grease perhaps!), the font has some sharp edges inside which catch on the lines as they are sliding through. 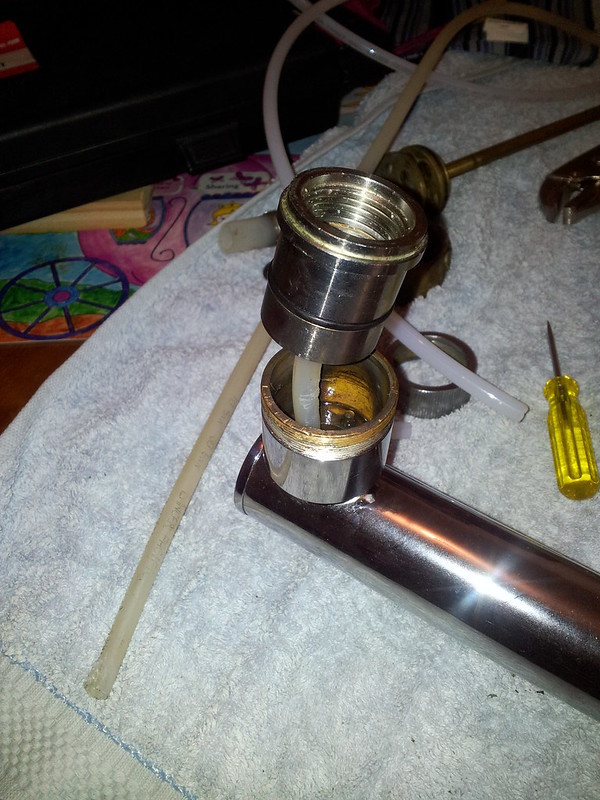 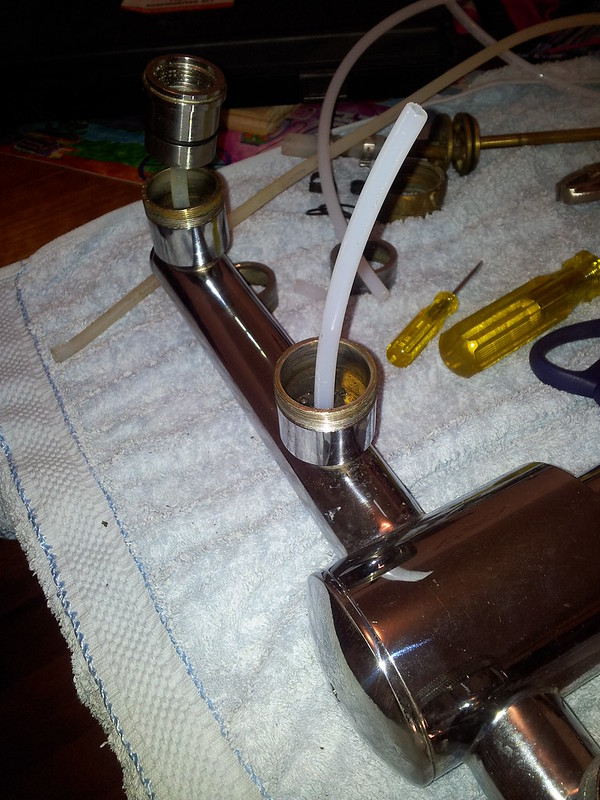 Ok, you’re half way there! Time to remove the compression nut and fitting from the tap mount. 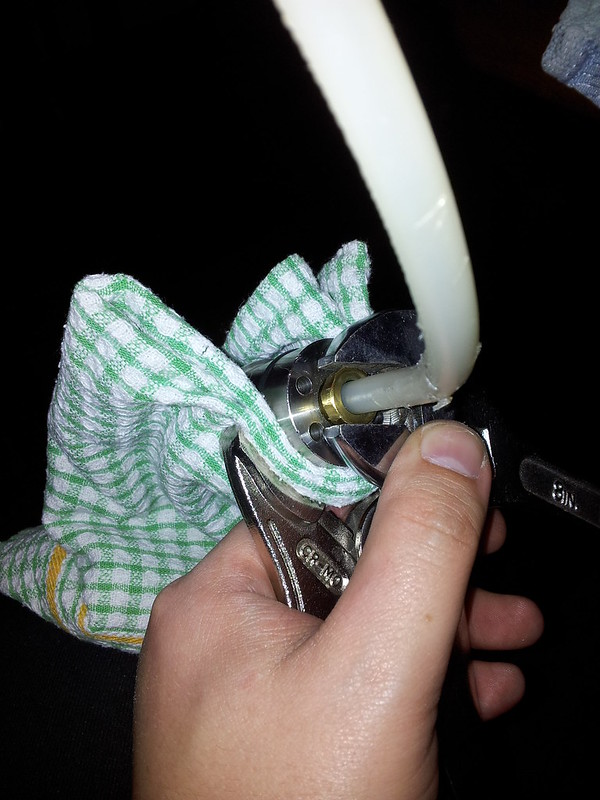 To remove the olives from the old line, I cut the old line off flush with the compression nut, and placed the nut in a vice. It’s brass – so it’s very soft metal – be careful not to damage the threads! Once it was in the soft-jaw vice, I pushed the line with the olive in it out of the compression fitting, pushing from the side I cut and the line should just pop out. I needed to cut the line off the olive, this bit is a little fiddly so be careful.

Now, find a ballpoint pen (grab a couple of different types, some work better than others) and put the kettle on. You’ll need both for fitting the olives in the line. Believe it or not, I think I forgot pics of this part!

Push the compression nut onto the line, making sure the threaded end is at the right end (make sure you do this first! – you’ll hate yourself if you put the Olive in first!) and then dip the line into some boiling water from the kettle, in a glass. This will soften the beer line nicely, and you may need to stretch the line slightly with the end of a phillips head screwdriver before pushing the olive in with the ballpoint pen – however I only needed to do this on two of my lines before realising the pen I was using wasn’t great, the next one I tried worked perfectly. 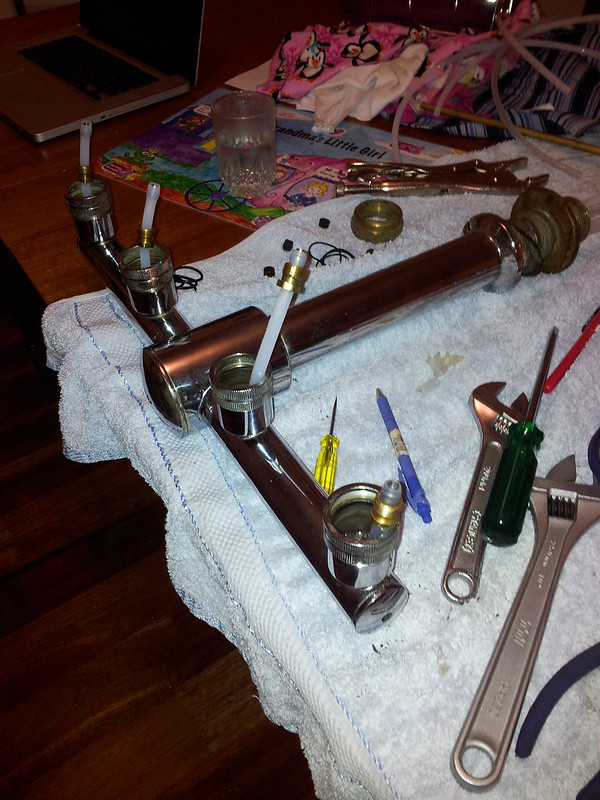 Now you’re on the home stretch. The tap mounts appeared to be solid stainless and mine were a bit crusty, so I have them soaking in PBW right now. Even after an hour they’re coming up like new – some of the crusty bits inside the threads needed to be cleaned out with a brush but that’s no issue. Don’t PBW the brass compression nuts. Brass doesn’t go with PBW, and besides, they never touch your beer so they don’t need to be spotless.

Assembly is the reverse of disassembly. (Ahh, that copout works so well right now…!)

Sound like too much work? I hear Andale can replace the lines for you, for a fee, but I didn’t bother asking because I had everything I needed here, and just needed to spend a little time doing it.

I can’t wait to pour a beer from this thing!