Have you just picked up a stacked Dell R710 for a bargain price, ready to build a sweet infosec lab?

You know what I mean. All the fruit. Dual Hex core Xeons, a stack of SAS disk and a huge amount of RAM?

It’s a thing of beauty! It’ll run a bunch of VMs and anything you could ever throw at it in a home environment. But, there’s only one issue. Everything seems to work, except VGA.

Did you do what I did? Did you grab a random VGA-to-HDMI cable then plug it into a HDMI-to-DVI adapter, and stick it into the closest spare LCD/TFT monitor you had handy? Then, the VGA didn’t work?

Well. It COULD be the cable, even if that same cable works on other systems!

Firstly, if your iDRAC6 Enterprise works, then your VGA works, so this is the first thing to check. This isn’t without its own set of issues in a modern environment where Java is essentially deprecated, but for that /r/homelab to the rescue again!

But, thanks to the super fine folk over at /r/homelab (who are almost entirely to blame for me buying an R710) they provided the hints needed which lead to…

It does seem that the VGA chipset is incredibly shitty and it can’t even run a basic converter to DVI, which I guess is understandable given it’s a server that doesn’t have a monitor connected for 99% of its life.

I sat down tonight to work on my PWK/OSCP lab report (Yeah, I’ve been doing PWK!) before my upcoming exam, and intended to use Microsoft Word on my Mac to do write it up in, just because I’m familiar with it. But, of course, all my notes are in Keepnote which runs on Kali.

Sure, I can run Kali in a VM on my laptop, and I actually already do, but I don’t at all fancy wrangling with cross-VM copy/paste etc. Sure, my data is stored in a synced cloud service, so it’s actually already even available on my macOS drive anyway, but, it would be nice to just use Keepnote natively to access the notes.

Turned out there’s a couple of hoops to jump through, to be expected I suppose – as unfortunately Keepnote appears to be all but abandoned, given the latest version is from 2012.

I found some details at highon.coffee, which were a good start. Unfortunately, there was perhaps already a dependency installed on the laptop used there, or perhaps Brew has just changed that much, that the dependencies suggested didn’t work for me.

I used the first couple of suggestions, but needed to work out an issue with Glade missing from pygtk.,but a couple of Google’s later, and I have it worked out. The updated pygtk install command required is:

Possibly the .dmg installed on highon.coffee provided glade, but brew doesn’t. Not sure… Anyway, Keepnote works on macOS 🙂

I’m intending to blog once a week once I’m done with OSCP, but we’ll see how that goes. Hopefully I will be certified OSCP by July, which was my goal when I signed up at the start of the year 🙂

I did a short presentation at SecTalks Adelaide 0x05 on December 7th.

It honestly wasn’t anything too groundbreaking, but I have enjoyed running an SSH honeypot so far; I really enjoy the fact I’m collecting malware and submitting it to VirusTotal. So far I have about 35 malware samples that VT didn’t know about that I have submitted! Every little bit helps!

Here are my slides: ModernHoneyNet

After really enjoying the last “vanilla”(i.e. Saison yeast only) Belgian Saison I brewed, I took more of a dive into the commercial beers available in this style. There are a range of reasonably common Belgian Saisons available here; De Ranke and Dupont to name a couple, and a few from American breweries like Golden Road can be found occasionally along side Australian breweries like Bridge Road Brewers who are now also dabbling in the funkier end of the spectrum.

Unfortunately I’ve not yet had the guts to spend $35+ AUD on the bottles of Jester King that are available here, though I’m sure they will be awesome.

END_OF_DOCUMENT_TOKEN_TO_BE_REPLACED

I’ve been busy with pen testing our mobile/web apps and writing documentation at work recently, and so far the best music I’ve found has been the chilled out mixes by Fluidified.

Yesterday I was lucky enough to be invited to the Vale Inn for their Sunday Sea and Vines lunch – Beers and Beasts! I was there as Beer Fingers’ guest which I was very thankful for. It was a great chance to try some McLaren Vale Beer Company beers that normally you wouldn’t get the chance to try, and to meet the brewers of the beers themselves.

They had a hoppy oatmeal-ish Stout experiment on tap, which was very popular judging by the sheer number of people who had it in their cups, I ended up drinking far too much of it myself!

It was also a great chance to talk to the actual brewers themselves, I ment both Jeff and Kai who are the brewers for MV Beer and spent a bit of time talking with Kai about how the new Willunga brewery is setup, and how they do things on a commercial scale. This was certainly something you don’t get to do every day 🙂

Most of all I enjoyed just hanging out with other brewers, both home brewers and commercial brewers, and meeting more people from the BrewAdelaide forum! 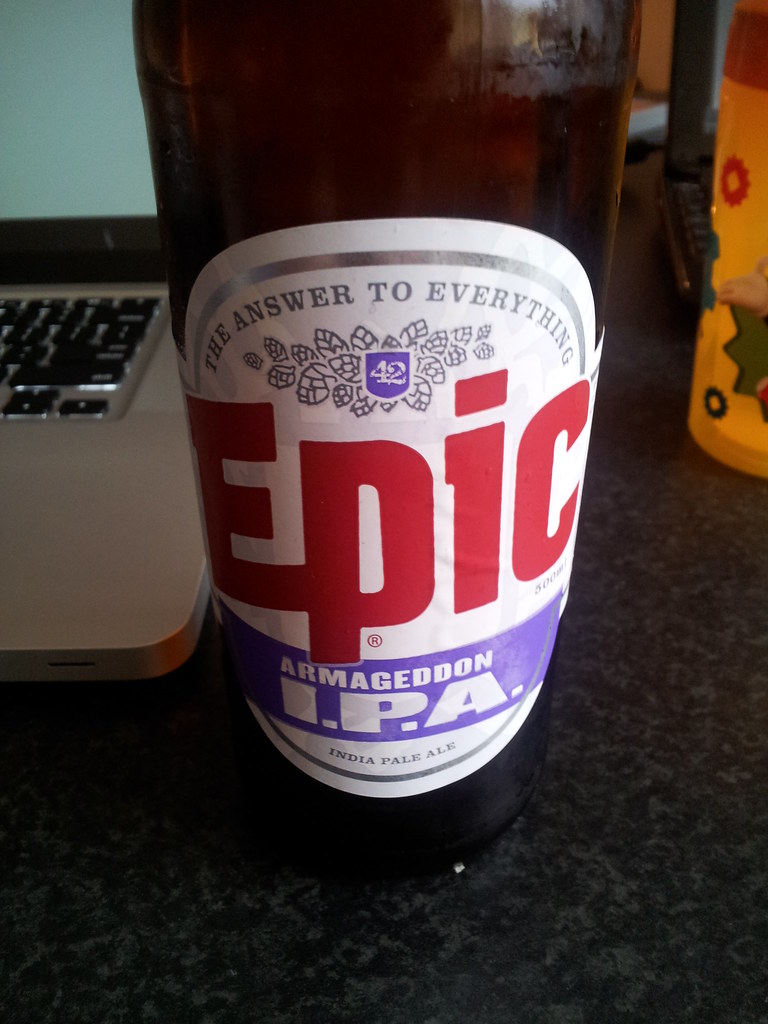 As I alluded to earlier, I have already started making a few changes for my next brew. 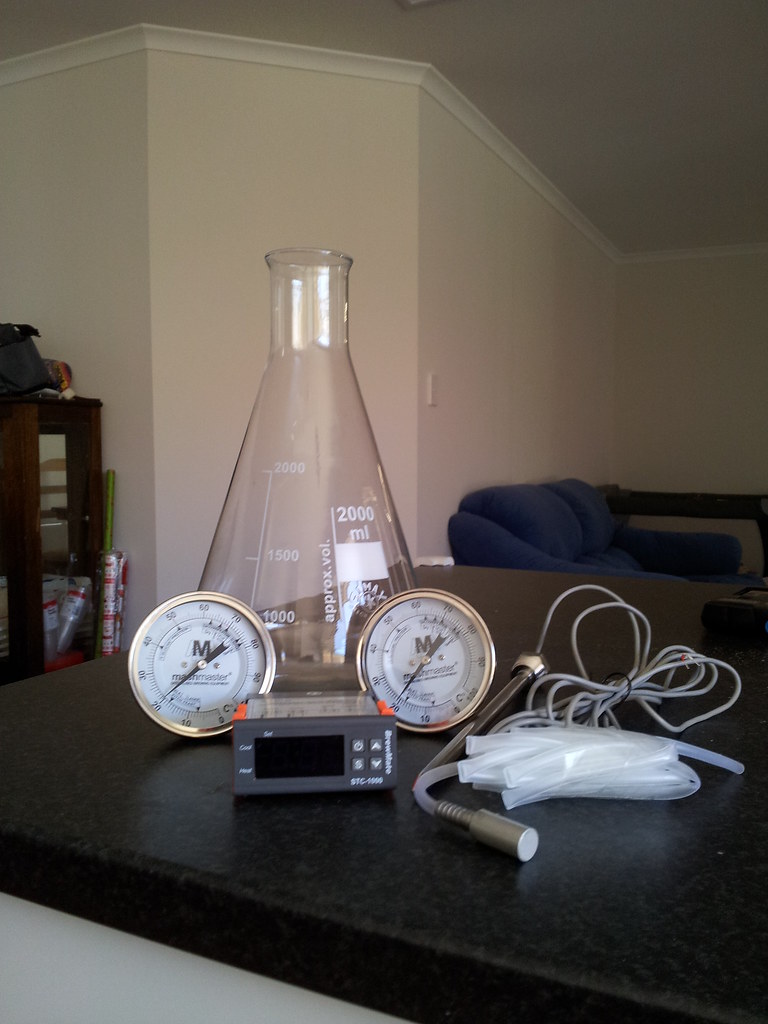 In the pics here, you can see the 2L Borosillicate glass flask I will be using for yeast starters, the STC-1000 controller for the fridge/heat belt for fermentation control; two thermometers for when I start All Grain brewing, the left one for the Hot Liquor Tun and the Right one is a long thread for Mash/Lauter Tun which will be an Esky, hopefully to be purchased in the next week or so. Also pictured is a sintered aeration stone with silicon air-line for wort oxygenation and finally the upgraded stainless steel temperature probe for the STC-1000 controller.

Just because it’s so cool, here’s a close up of the thermometer front image. It’ll certainly make it a bit easier to visually see when the right temps are hit! 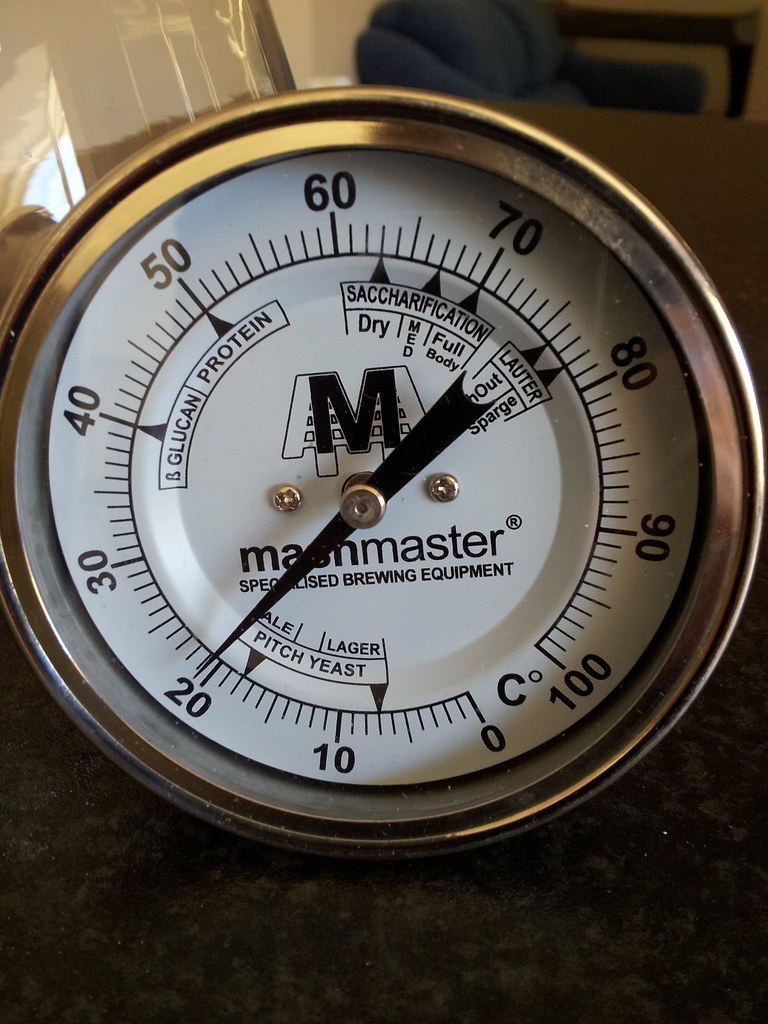 Brew One, my first Extract home brew, has been bottled and is currently bottle conditioning. It’s been in the cupboard for 2 weeks now, and it has been improving steadily. I fridged two bottles after they had been conditioning for a week to try them, and carbonation is coming along well. There was a distinct acetaldahyde flavor so they were definitely not ready. I knew a week would be too early, but I just couldn’t wait 🙂

I opened the second bottle after the 2nd week, and the acetaldahyde flavors had subsided significantly and the malts were slightly more evident. But, I’m not happy with it overall so far. I’ll try it again in the 3rd week, next week – at my 30th birthday party!

Below is a pic of the brewing ‘kit’ I bought from Brewcraft; experiences with this particular chain have been less than positive, so I have chosen not to shop there in the future. I have since used BeerBelly to buy some Wyeast smack packs, Borosillicate flask and StarSan. I have also have recently placed an order with Brew Adelaide for a few sacks of base malt for the next few all grain beers. 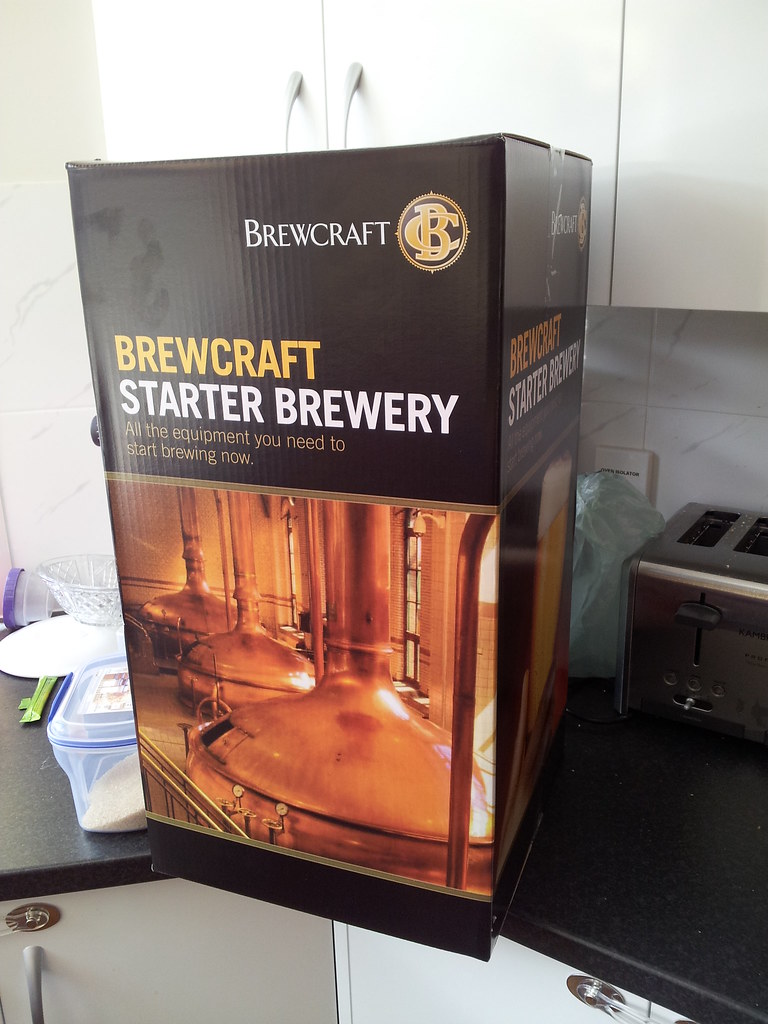 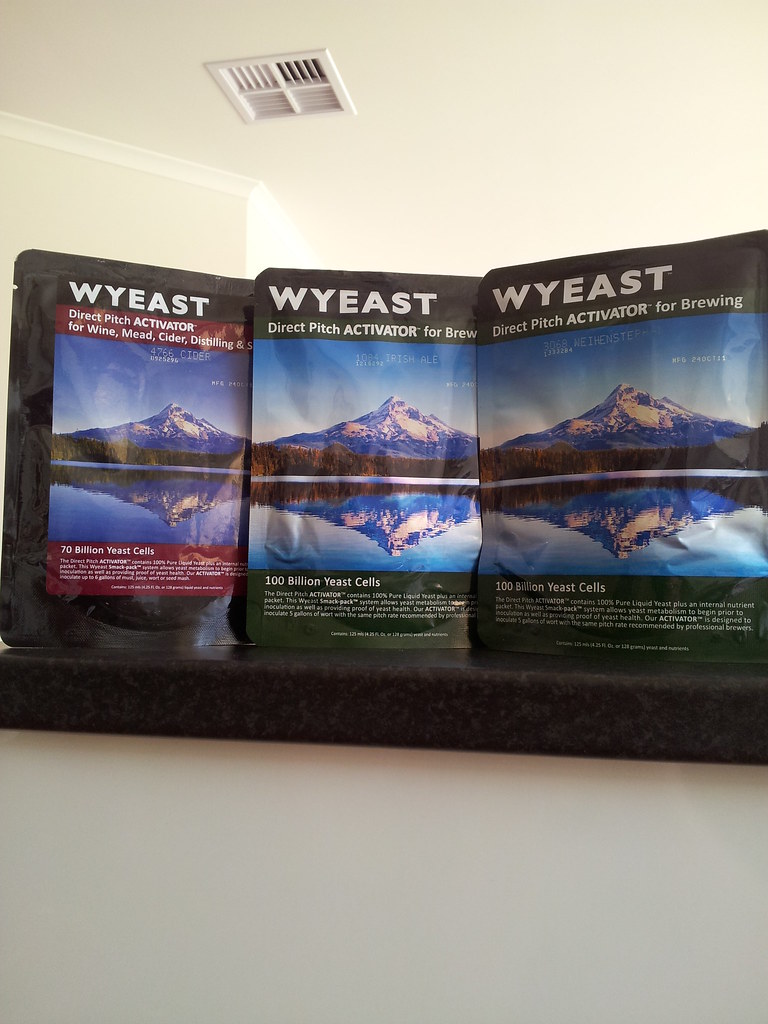